The worst fear I have is overpopulation. I thought of the Earth trying valiantly to save itself from too much of us, flinging disease after disaster. I thought of those awesome depictions of the Black Death as a flying skeleton, clearing away the clutter of too much birth. Since making art of my fears helps me sleep at night, I painted it. The clutter is all the junk people in America were buying for their kids, and the earth without it. A French friend looked at it and said, “Haha! That’s why the word is litter… for birth and for trash.”
Painting this took about two months, and incorporated images from eleven previous paintings in the series, which I called Brazen Images. We meant it for a calendar, but couldn’t get anyone to print it back in those early Mac days. The previous eleven paintings were mouse-created in Studio 8, using only 256 colors, and are thankfully preserved in this condition. Blown up, they look like mosaics. In 1991, they were all reworked when Adobe Photoshop came out with its millions of colors. Earth Angel was started in Studio 8, but finished in Photoshop. After I’d painted that skull on the Wacom there was no going back, and I was able to create the rest of the skeleton to match. The earliest work files show a clumsy skeleton but a terrific arch, as I’d finally gotten to visit Rome and its wonderful tombs full of juxtaposition. In the finished work, dimly around the inside of the arch appear various dieties from the Brazen Images paintings. The images represent fertility and birth and are applauding the clearing away of the junk. In other words: Enough.
Also appearing are elements painted in 1988 in MacDraw II, which only allowed 8 colors, count them 8: black, white, magenta, red, yellow, green, blue, turquoise. I made Pointellist patterns in these colors and painted ads with them for BBDO.

This heavy cotton tee has the classic cotton look and feel. Casual elegance will make it an instant favorite in every man’s wardrobe.

There are no reviews yet.

Only logged in customers who have purchased this product may leave a review. 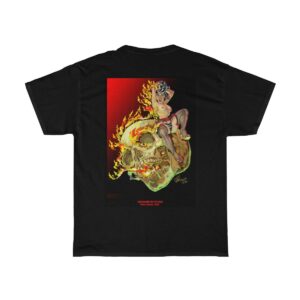 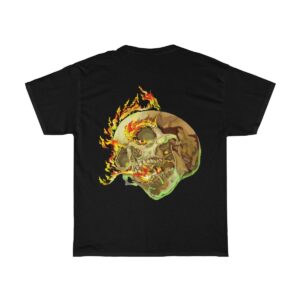